I was 'elected' to make the cake for our annual street party this year! I had seen some of the BBQ cakes on this site and wanted to try it myself (thanks to all whose ideas I used!!!) Then I had the idea of making it a 'Coleman Stove" since I live on Coleman St! I also wanted to try my sister-in-laws recipe for a lemon poke cake (my fav!) Overall, it didn't take me nearly as long as I thought it would and it turned out exactly as I had pictured! The Poke Cake was amazing! So moist and lemony… Continue

I have decided to do a cake contest for all my friends around the world. The

theme will be"Summer Sensations".Basically anything that has to do with

summer is acceptable.Vacations, beach, Summer holidays, Out of school. 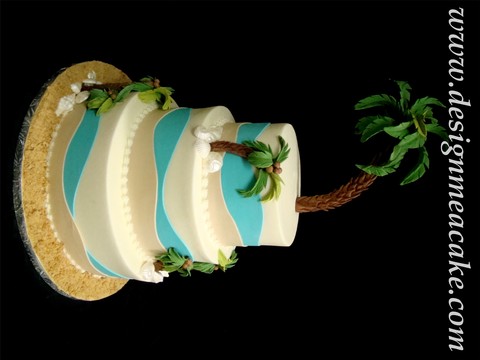 For more details,rules and how to participate, visit…

Please visit my main cake blog! Become a follower and comment as you see fit. I would love to hear from everyone!
http://thesugarhighcakery.blogspot.com/

A lot of people ask me all the time about Edible glue. So here is some information on it. Edible Glue is basically used to glue Fondant, Gumpaste, or pastillaje.

Is it right to use water as glue? The answer is yes. Certain details can be glued with a brush and water, but you have to keep in mind that water is not alcohol based, so it doesnt dry as fast. If you put too much,

you will have a real slippery mess.

So, the question is how much is needed? Think about…

Back to Basics DVD preview

We now have a video clip available on our newest DVD: Back to Basics.

You can see it here.

I am a good baker... solid skills but could use a lot of help in the decoration world. any advice. my dtr is going to get married in about 12 months and would love to make her the wedding cake she deserves. I figure with a year to go and lots of practice I can get there. Any advice?

If anyone is interested, the Sports Cake Contest on my other site Cake Decorating Corner is ending 1 week from now on June 30th.
Please don't enter the photo on this site.

Here is the link if you want to enter: Click here

The contest is not just for the best cake, it is also… Continue

It's Our Half Birthday!

Today, CakesWeBake.com is 6 months old! Yeah! Thank you to everyone for helping this site grow as quickly as it has.

I was anxious to get home from work and finally finish decorating the cakes. I was surprised not only to find a full house, but one of my cakes was pretty much ruined. The beer mug cake was collapsing and all I can see was bulging fondant between the bottom and middle layer. What made things worse, that was my son's Godfather's cake and he was at the house! His wife knew I was baking him a cake as a gift and I was so embarassed to know she was aware that was his cake. I… Continue

This is Sharon Zambito of SugarEd Productions.

DVDs for cake decorating on all skill levels. And tools…

Constipated - Stiff, stodgy, or recalcitrant: "united only in a constipated hatred of change of any kind" (John Fowles)


This is exactly what I encountered when I tried to find edible decorations for the wedding cakes I was making back in 1996. Not only were the decorations constipated but the people making and those selling them also suffered from a serious case of constipation!
If anyone remembers the way wedding and birthday… Continue

Does anyone charge for tastings(wedding)?

Some people say you should never do it and others say a small fee is fair for you time. What do you think?

How do you make a moist cake made from scratch?

My biggest fear is that when I make a cake from scratch that it's going to be dry. I saw others suggest the simple syrup technique but How can make the batter....I guess lighter?

I have a new tutorial in Youtube for those who are begining to learn cake decor!

Hi everyone!!! I want to let you know that now you can register for this class directly on my website:
http://www.silvinabarbozasugarartist.net
Don't miss it!!!
Thank you!
Silvina Barboza

Looking for a great red velvet recipe and how to achieve that beautiful red color.

Doing a red velvet cake makes me nervous because I want to do it right. I love the richness of it but can be a disaster if not don correctly.

Whew!! What a crazy week last week was! First I made some mini cakes for 2 staff members who were leaving. I had been wanting to try the mini cakes, so I thought "what better way!?" They turned out OK, although hard to cover with the fondant- they're so small! I used a large cupcake and a mini cupcake in top to make a 2-tiered mini cake. I'll post some pics later.
On top of THAT, I had a friend refer a friend who wanted to 50th wedding anniversary cake for Saturday! I had…
Continue