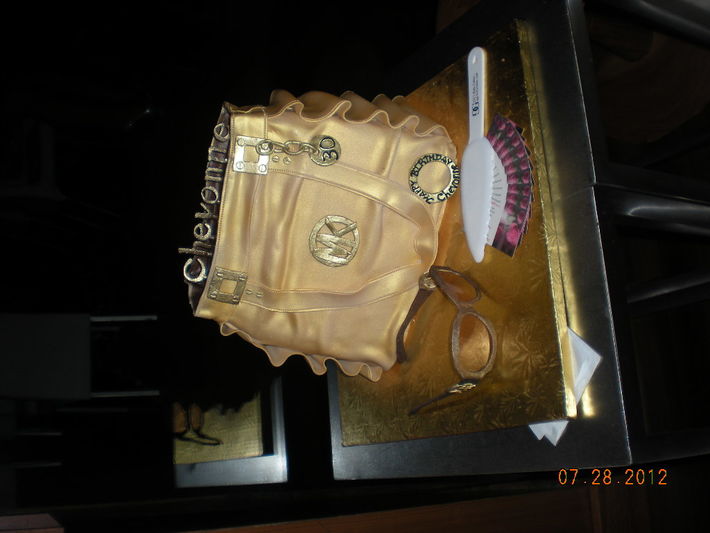 MK bag done with French vanilla cake, french vanilla buttercream and Vanilla Fondant. Sunglasses are don with Gum Paste and Gelatin. All embellishments on the bag are gum paste.

this is really beautiful

Thanks Arzan Noorani. Here's how I did this cake.

This cake was done using 2 half sheet cakes (11x15 each) that were cut into three equal parts (11x5 each). I stack the cakes with buttercream in between each layer. Crumb coated and doweled the cake and put it in the freezer for about 2 hours. Once the cake was frozen, I removed it and carved the sides so they slant inward toward the top of the structure. I also carved the corners so they weren't so sharp. I let the cake unthaw, then iced it with another thin layer of buttercream. When the cake was iced, I rolled out my fondant to about 1/8 inch thick, measured the cake and attached 2 pieces of fondant to the cake, connecting on the sides. For the side pieces, I measured the sides and added 4 inches to allow for the pleating. To pleat the sides, I used dowel rods while atting the fondant to the cake above the rod. For the "wrinkles" in the front and back, I used my fingers to slightly "pinch" the fondant as I applied it. Once the fondant is in place, you can play around with the folds beofre it drys in place.

While the cake thawed, I made the accent pieces and the straps, all from fondant. For the buckles, I used the large and small square cutters from Wilton. I used a #12 tip to cut out the screws and used my cutting tool to imprint the screw top. The chain and medallions were made from fondant as well and the medallions were made using Wilton's meduium and large round cutters. For the straps, I measured the distance between the placement of the buckles and the height of the bag. I used the quilting tool to imprint stitching on the straps and the band around the top of the bag. The band was made by measuring the top of the bag and cutting 2 strips that were attached at each side with gum glue adhesive. All accents were painted using Gold Metallic Highlighter and vanilla. The #30 on the smaller medallion was done by cutting out the numbers using Wilton's number cutters. Black buttercream icing was used to trace the numbers and write on the larger medallion after the paint was dry. The Sunglasses were done using gumpaste. First I made a pattern from a pair of real sunglasses on paper. I traced the arms as a seperate piece. I then used used the patterns to cut out the gumpaste, which was rolled out to 1/16 using the 6 inch rolling pin and rings from Wilton. For the arms, I used the bottom of a disposable shot glass to form the circle. The letters were also cut using the letter cutters and removing the back of the "K" and attaching the front to the side if the "M". I used the new Fondant mold from Wilton for the larger letters and did them in the same manner. The lenses for the glasses were a little tricky and took me about 6 times to get them right. They are made out of unflavored gelatin.

The recipe is:
1 Packet of Knox Gelatin
1/4 cup of plain tap water (add food color to water for tint)
Combine and let sit (bloom) for about 5 minutes. Dissolve completely over hot water, stirring gently to avoid bubbles. Pour onto a sheet of acetate using a spatula to level, or tap gently on the counter. Let sit undisturbed for several days or until it starts to pull away from the surface. It will appear to be almost plastic and can be cut with scissors.

I hope these instructions are understandable and helpful. Thanks again for looking.

Comment by Arzan Noorani on August 1, 2012 at 5:20pm
This is awesome. Could you post a small tutorial on how you did it. Thanks.