Cake Ideas, is it Stealing????

I have a question about cake ideas.... If you or a customer, searches the internet, and you find a cake that they or you like and you try to replicated the cake, sometimes exactly, sometimes with your own spin on it.....Is that stealing? or should you use it for a contest or a show?  Making money off of it?  Was just thinking about that....want ya'll thoughts on this one.

Permalink Reply by Karen Underdahl on September 27, 2011 at 8:54am
Great - I look forward to seeing yours and all the rest of the cakes!!!!

Permalink Reply by RUBY JOHNSON on September 27, 2011 at 11:04am
I must say, I agree with everyone here. I also get requests for cakes designs from some one else. I tell my client that I wont copy exact, but would change something on it. So, you can take someone elses idea and twist it to become yours. Just like the lady bug cake I just made, how can you change that. You have a basic color, red with black dots. The change would be your background items, like flowers, etc. Just saying!

No, Ruby, you have to reinvent the lady bug!

Permalink Reply by amanda marshall on September 27, 2011 at 4:45pm
i'm pretty new to baking and to be honest, just now anyway, cos of my inexperience, i look through the internet to get ideas.  I don't think i'm great at conjuring up an idea of a cake, don't feel i'm very artistic (although a friend disagreed with me after seeing my cakes).  But never was artistic, but do love seeing a cake and love to emulate it, making one or two changes, putting on my own mark on it. I so hope the origional designer down't get angry about it.  although did read one cake designer getting hot under the collar, cos she saw somewhere, someone had copied her design without asking her permission.

Permalink Reply by Dawn Becker on September 27, 2011 at 5:14pm
She can get hot all she wants. by law she can't do a thing about it. We ask permission out of respect, not because we have to. If it were illegal - she would have had grounds to sue - and I'm sure she would have - or at least someone somewhere would have at sometime for some design.

Permalink Reply by Marian Benton-Baker on September 27, 2011 at 7:47pm
I have often wondered the same thing, Gretchen, because I am always scouring the Internet for inspiration for my next cake. I believe that cake decorators are sharers and I don't think any of them/us will resent another having a light bulb go off when viewing one of their creations.  I have so many cake books, so many memberships to cake clubs and web sites. I join these venues for inspiration and sharing. I have been blessed to study under some of the masters - most notably, Betty Van Norstrand - but also Chef Steve Ciccone, Tony Hartman, Gloria Griffin, Geraldine Randolsome, Joelle Mahoney, the Cake Diva, AnnaBelle Eversole......the one thing I've learned from them is that cake decorators delight in sharing their knowledge. Remember: imitation is the sincerest form of flattery.

Permalink Reply by RUBY JOHNSON on September 27, 2011 at 7:50pm
Great examples Bonnie.  And love your cakes!

Permalink Reply by Marian Benton-Baker on September 27, 2011 at 7:55pm
Dawn: I could not have hoped for a better response than your post. There are really no original ideas any more. We all use the same tools, techniques, colors, etc., just in different ways.  And....even the original artist won't be able to make two identical cakes. It just ain't gonna happen.

WOW! I LOVE THE WAY YOU THINK DAWN BECKER! I feel anybody with a little artistic feeling inside, looks at something and says, Beautiful, I want to try to do that! And I agree, that's with everything in this world. I do photography also, and you should hear what the photography world has to say. I think we should all learn from each other and teach those interested in our work, what we know. There's more than enough people in this world to support us all in business to make money. But there are people on lower budgets that want something particular, but affordable, and if there is someone willing to put in that time for them, kuddos to them! I'm not an expert at anything I do. I study and practice on all that I do. But I'm willing to share what I do with others. That's what makes the world go round. :} And just saying, the majority of folks out there has no idea who "the origional designer" may be. It's Ok-I would be proud if someone thought my cake was so pretty, they wanted to replicate it.

Bottom line: I never take credit for anything - ANYTHING.  Every last "idea" we have is inspired by someone else.  There is not a single new idea in this world.  Even new technology is based on a Sci-Fi idea from years and years ago.  How many times have we seen cell phone-like technology in old black and whites and even silent films?  Look at HG Wells – he described a flying machine – but the Wright Brothers get all the credit.

So I say things like, This is MY version of a Martha Stewart Cake I saw.  or - I saw this on Amazing Cakes and thought I'd try a downsized version.  or - I was surfing the net and combined about 4 different ideas I saw.  If I post a cake on this site based on something I saw here I might say, I loved JJ's cake - thought I'd try my hand at it.  Thanks for the inspiration, JJ!  But to my outside world (who doesn't know JJ) I would simply say I found it on the internet.

And lastly -here I may post - saw a similar cake on Cake Central, here's my version.  But again to the world, got the idea off an internet search.

It's not rocket science, people.  There is no IDEA we invented.  Which is what the original poster asked about:

Cake Ideas, is it Stealing????

Since there is no such thing as an original idea - what is the answer to THAT question?

If we stop using already thought up ideas, we can all stop making cakes today... and sewing (all suits and wedding dresses look basically the same), and cars (all cars look basically the same, think about it), and washing machines (and they differ how?), and building houses (I think they all have at least four walls and roof)... yeah - it is all the same philosophy.  And yes, even cakes look alike – even when you put your own spin on it – it’s still looks like many, many others.

OH!!  Sharon Z.  Many things on her videos that she gets all this credit for I've been doing for years before she came along - and a couple of those things I "thought of" on my own (read sentence above for qualifier) - but she gets credit from every one - "OH!  I use the Sharon Z method" - "you should try the Sharon Z method!!."

Not picking on you Sharon - you know I love you - you are just a really handy public example.  And she is actually very gracious and never says it’s her idea to begin with.  It’s simply the way she does it.  Other people call it the Sharon Z way.

Look up any Emeril Recipe and I can show you at least 10 that are so close to exactly just like it.  But he gets the credit for recipes that have existed for long before he came along.

Again - no original idea exists - even if you think you invented it - I'm willing to bet someone out there is already doing it just exactly that way.  I've seen it too many times for myself.

No, not stealing!!  We all get inspired by other people's work and nobody "owns" a technique.  Rosemary is a lovely woman, whom I've had the pleasure of speaking with but unfortunately never met in person as we live so far away from one another.  She does absolutely beautiful work and she did an AMAZING job on her winning cake in Oklahoma in 2010.  I look forward to meeting her one day...maybe at the 2012 Tulsa show (I'll be going for sure Rosemary).

The techique that Rosemary re-created is a technique I use often.  As Rosemary states...there is probably nothing out there that hasn't been done before...to research this would almost be impossible.  This technique is what I call Tufted Billow Weave and has been trademarked.

Even though I've trademarked "Tufted Billow Weave" does not mean that people cannot use this technique.  A trademark protects a name, for example...Coca Cola is a trademark...this trademark didn't stop Pepsi from creating their own "cola", they just couldn't call it Coca Cola.

I think, the only time you are really "stealing" is when you are creating a licensed character for profit.

This is one of my competition cakes at the OSSAS last year. I fell in love with one of Susan Trianos' cakes on cakecentral.  I could not get the "little puffs" out of my mind. I contacted her, told her how much I loved her work, and asked if she would mind if I used the technique at Oklahoma. She could not give me instructions because she was doing a "how to" article for CC magazine at the time, but she gave me her blessing to make my own version for competition. I blended the single technique with four other tiers of my own design. You can plainly see that even though our puff styles are similar, the cakes themes are totally different. Saying that I "copied" Susan because of a single technique, would be like saying that everyone that uses Marina Sousa's hanging jewels is "stealing" from her designs. I hope to one day inspire bakers to purchase tools or techniques I market myself! 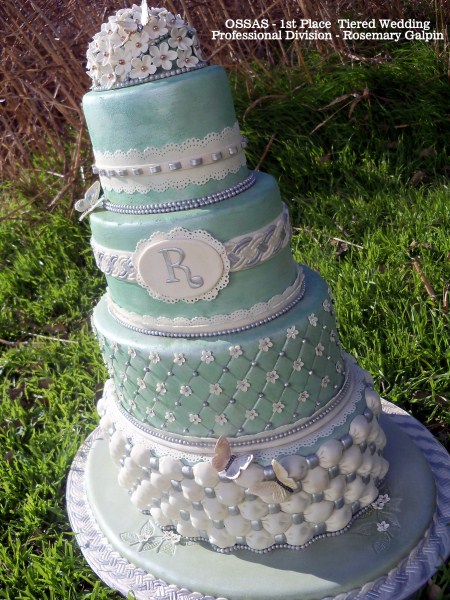 Permalink Reply by Rosemary Galpin on October 13, 2011 at 4:46pm
Hello Susan. I'm excited to hear that you will be in Tulsa next year. I can't wait to finally meet you and see your beautiful work in person! I did very well this year taking 1-1st, 3-2nds, and 1-3rd in the Masters Division. I think I'll have the courage (and hopefully the knowledge)to try one. Are you doing a Show cake in 2012? I need to know what I'm up against...LOL! BTW, are you going to the ICES Convention next year?
Rosemary

Congrats!!  I'd love to see photos.  I think I might...love the theme :), and you have nothing to worry about my dear, your work is amazing.  I'm going to try to get to ICES too, I think my schedule is still open for that weekend.  I should block in off in my calendar now.

Have a great day,